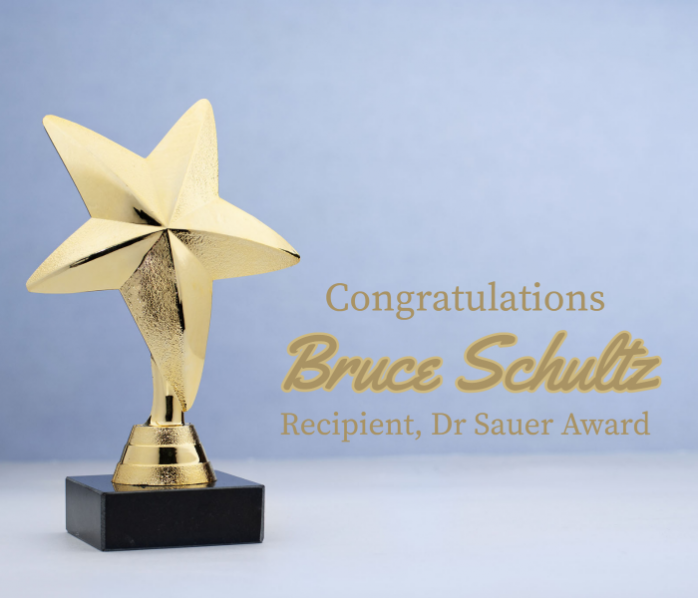 Bruce has played an active role in the building industry both in our province and on a national level. Among his many accomplishments in his tenure, Bruce’s work on the adoption of changes to the rules on window heights for single-family homes exemplifies his commitment to making our province a safer place. As one of his nominators, Andy Smith, said: “There will be many children, parents, and paramedics who will be grateful for Bruce’s work on this issue in the years to come.”

Bruce’s statement on his win:

“Someone who is dedicated is defined as being devoted to an aim or vocation, having single-minded loyalty or integrity. Those are certainly qualities that I saw in Dr. Sauer. I have had the good fortune to have been in the regulatory part of the industry long enough to have sat across the table from Dr. Sauer on a few occasions in the time leading up to the formulation of the Safety Codes Council and after its beginning 28 years ago. He is a very charismatic person who could engage anyone in conversation, tell an interesting story and relate it all to the issue at hand. His dedication to public service and making things better for people was obvious.

Dedication or commitment is not always something that you set out to achieve. It can also be something you notice when you look back. When starting out as a draftsman with a NAIT diploma almost 43 years ago for a small engineering firm I was doing what I loved to do but only saw a dedication to a paycheck. The provincial government coaxed me through the regulatory door 35 years ago. I was part of the group of people who brought in the Safety Codes Act in 1993. It was then that I started to get to know some of the many people I encountered through my career who were already committed to the safety codes system. There were to be many more that I would learn from, disagree with, and admire. In 1998 I opened another door and began with the City of Calgary. They encouraged me in my efforts to go outside the normal SCO boundaries to represent them and to work to change and improve the safety codes and the system. I have been involved provincially and nationally with the development of 3 editions of the National Building and Fire Codes, 3 Alberta Building Codes, a CSA standard and an NFPA standard. I have also participated in fire research projects undertaken to better understand fire dynamics and which have led to numerous code changes. Many other technical changes including those dealing with fire stopping, spatial separation, and openable windows in residential occupancies have also been a rewarding part of my career. Interpretations and policy developments too numerous to mention formed part of my involvement on the systemic side. Since retirement 18 months ago, I have continued to stay involved nationally, chairing the NRC Standing Committee on Fire Protection into the 2025 code cycle. Throughout all my many absences for work and committees my family continued to support me to be involved as much as I was.

It is through the work and dedication of the volunteer members of the various Sub-councils that the provincial safety system is what it is and that the voice of the industry continues to be carried to the province. I had the good fortune to contribute to the safety codes system over nine great years on the Building Sub-council as a nominee of the Alberta Building Officials Association (ABOA).  I would like to thank the ABOA for the continued support; my fellow Sub-council members for putting up with me over those nine years (apparently the meetings are shorter now); my managers and fellow SCOs at the City of Calgary for allowing me to contribute; and to the staff at the Council for their dedication to continuing to improve the safety system. I would especially like to thank those that took the time and effort to nominate me for the Dr. Sauer Award.

Based on what I have seen in other jurisdictions I think we have a great and unique safety system in Alberta. There is always room for improvement. It will continue to evolve which is an indication that it is a great system. That evolution will only continue if people continue to get involved whether you consider yourself dedicated or not.”

The Dr. Sauer Award recognizes sub-council members whose commitment and energy carry on the legacy of Dr. Ken Sauer, the Safety Codes Council’s first Board Chair.